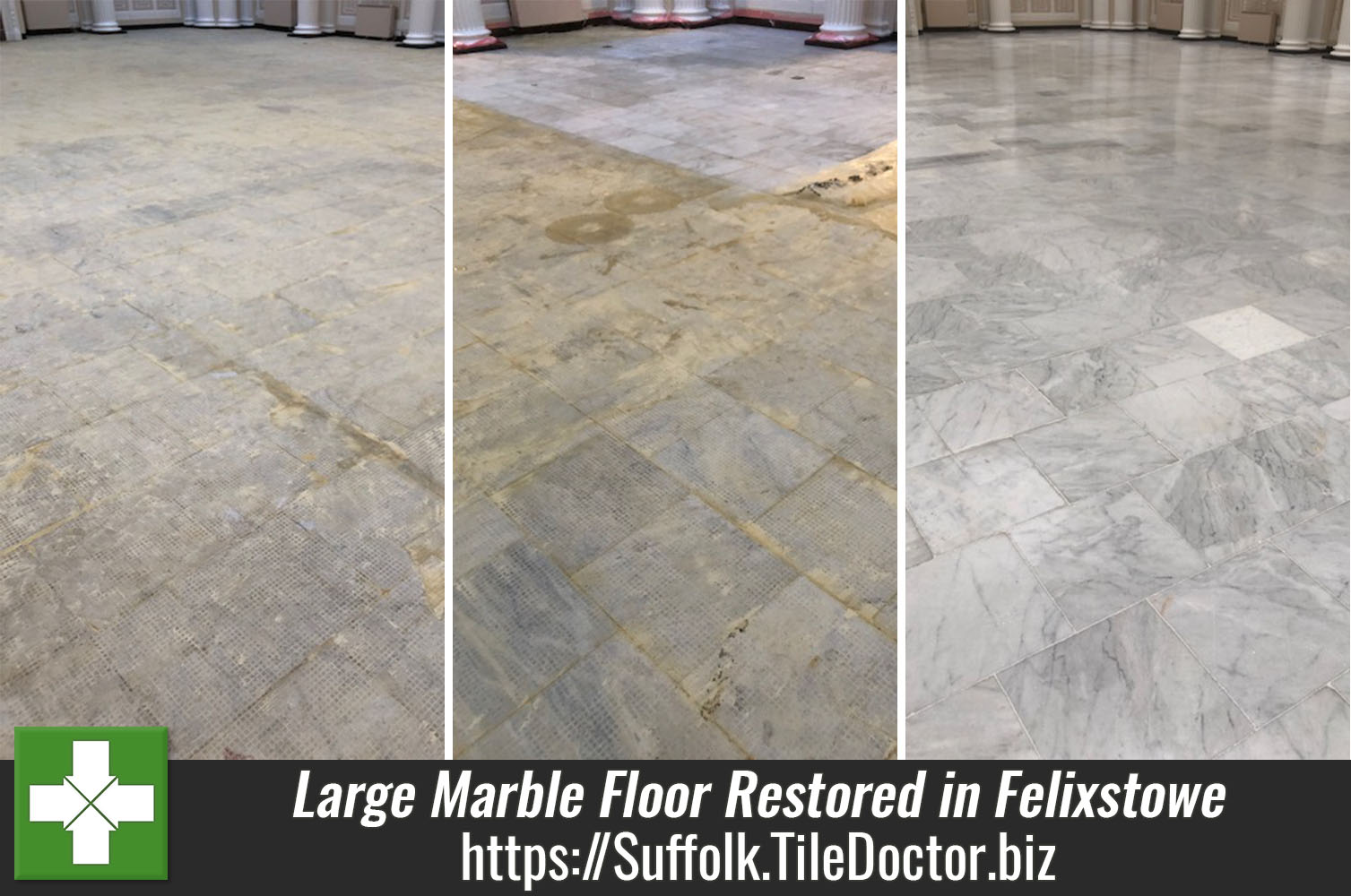 Earlier this year I was asked to restore a large 290m2 Marble tiled floor in a room known as Palm Court at the famous clifftop Grade II listed Felix Hotel in Felixstowe which has now been redeveloped into 61 retirement apartments with communal areas. The Felix Hotel was originally opened in Felixstowe in 1903 and was advertised as the Finest Hotel on the East Coast. It is said that Ms Simpson stayed at the Hotel during her divorce proceedings In Ipswich to allow her free to marry King Edward VIII.

The building was taken over by Fisons in 1952 who used it as their HQ and it is believed that they covered the Marble floor with carpet so they could use it for office space.
Our task was to remove all the carpet glue and restore the Marble tiles of Palm Court back to its original glory. The room is used for wedding ceremonies and the company that runs the property wanted to restore the floor as an original feature. There are some photos below of the room as it used to be when it was opened.

With 290m2 of Marble flooring to restore it was clearly large project however having worked on numerous stone floor restorations previously I was confident we could restore it and was able to bring Dean who runs the North Essex Tile Doctor to assist.

To provide an accurate price for the work however I visited the property to survey the floor and ran a test clean in one section. This allows me to work out the best method and products to use on the floor and ensure there are no surprises, the test worked out very well and transformed that small section of Marble remarkably well. The quote was agreed, and a suitable time was arranged to start the restoration which would take place over a few weeks.

I started the work by tackling the old carpet adhesive which covered the entire floor. The method I used involved applying a strong dilution of Tile Doctor Remove & Go which is a coatings remover that is safe to use on stone. Working in sections the product was applied to the surface and then covered with plastic sheeting to prevent the solution from drying out. It took the best part of a day to achieve this as the area was so large.

The following day we started removing the plastic in small sections and got to work scrubbing the Marble clean using a rotary machine fitted with a black scrubbing pad. Scraper blades were also used by hand to remove stubborn areas of glue and carpet backing. The floor was rinsed with water and the slurry extracted using an industrial wet vacuum. This part of the job took four days in total to complete but we could now see the beautiful marble that had been hidden beneath.

The next step was to restore the appearance of the Marble using a process we call Burnishing but is also referred to as Honing. This involves applying diamond encrusted pads of increasingly finer grits to the Marble tiles to grind off the dirt and polish the surface. We started with a very coarse 200-grit pad which was run over every tile three times using water to lubricate the process. This generated a fine slurry which is then rinsed off with water and then extracted with the wet vacuum The 200-grit pad was then followed using a sequence of 400, 800 grit pads rinsing each time between pads and extracting the slurry as before using the wet vacuum.

Burnishing the stone tiles took care of renovating the appearance of the Marble but did little for the grout which had been badly stained and over the years and now needed to be removed and replaced. Removing the old grout and replacing with new was a mammoth job but I knew it would make all the difference to the final appearance of the floor

With the grouting redone the floor was given a further polish with the application of a 1500-grit pad, again the floor was rinsed with water and extracted afterwards. This stage of re-grouting and polishing took another four days to complete.

The last stage was to seal the marble. To do this, two coats of Tile Doctor Ultra Seal were applied which took a further two days to apply and that’s with two of us doing the work. Tile Doctor Ultra Seal provides a protective seal and gives a no sheen natural look finish, so the floor is not left too shiny and slippery. The natural beauty of the marble was then allowed to shine through.

Once finished the floor looked amazing, the stone looked lighter in colour and overall, it gave the impression it has only recently been installed. I was incredibly pleased with the result and most importantly the Directors of Harvest House Ltd were delighted with the outcome. It had been hard work to bring such a large Marble floor back to life but a real pleasure to restore a historic 117-year-old floor back to its former glory.