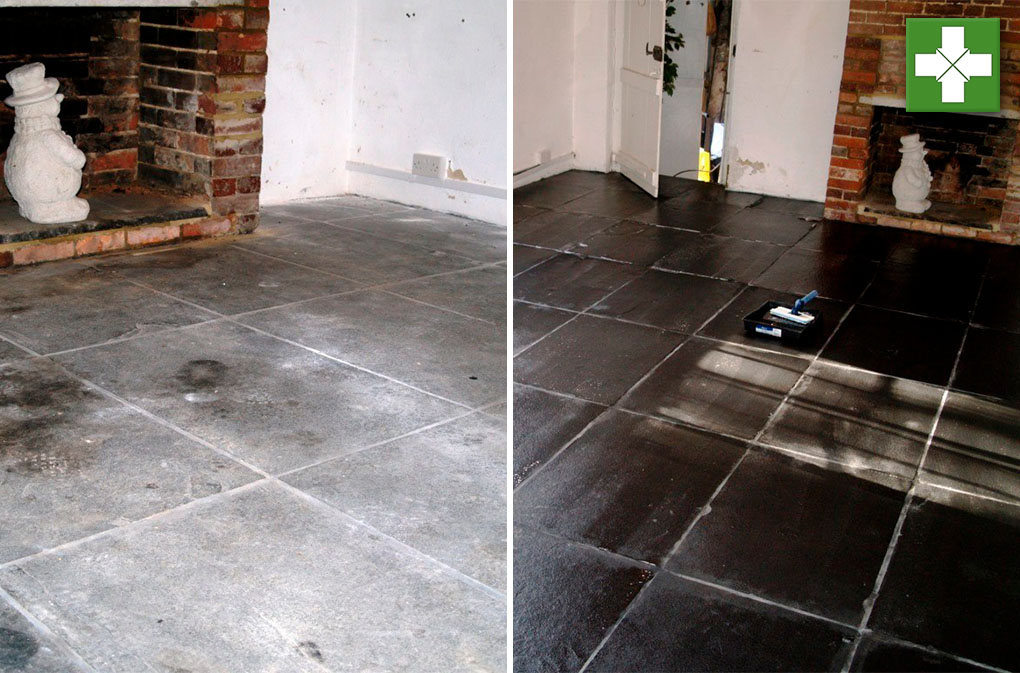 This Slate tiled floor is in a barn in Beckley, near Rye, Hawkhurst, Tenterden and Robertsbridge. For years it had been used to store furniture, gardening equipment and worryingly, a leaky motorbike which had stained the slate.

You can see from the photographs below that the Slate tiles were much worn, stained, faded and far from looking their best.

Firstly I swept out the whole area then applied Tile Doctor Remove and Go to several areas where engine oil had leaked. After leaving it to soak in for fifteen minutes I began to strip and clean the floor with Tile Doctor Pro-clean worked in with a buffer machine fitted with a black scrubbing pad. However it became apparent that some of the ridges on the slate were damaging the black pad so the remainder had to be done by hand with a deck brush. Once the stone was stripped and cleaned the appearance was even greyer than before. I assured the customer that once the sealer has been applied it would be transformed to a much darker colour.

After two days drying I returned to seal the floor checking first to ensure it was dry and no further work was required which is just as well as I had to wipe away what appeared to be stray dog paw prints. I got to work applying Tile Doctor Ultra Seal having previously estimated that four coats would sufficient to give it a dark finish; I should mention that Ultra Seal was chosen due to the fact that it’s provides a no-sheen natural look appearance.

Frustratingly it was quite a cold barn with little ventilation despite it being an unseasonably warm autumn day outside and this increased drying times. However by about four o’clock in the afternoon the job was finished and looking remarkably transformed. The customer was pleased with the improvement and is now moving forward with to fit out the barn as a yoga studio.