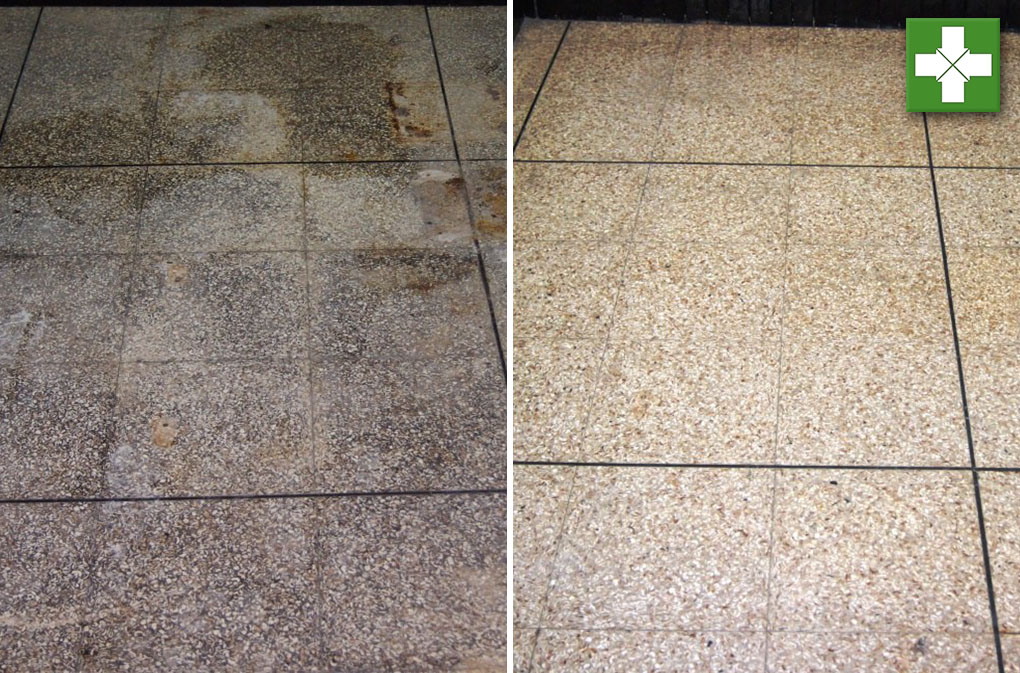 These photographs are of a Stained Terrazzo Tiled floor from an old Fish and Chip shop in Wigan which had been closed for several months due to the owner being ill. The shop had then been sold and the new owners asked us to call in and re-furbish the tired and badly stained tiles rather than go to the expense of re-tiling or re-surfacing the Floor area, which would have cost a lot more than what we charged.

Terrazzo is a composite tile made up of Marble and Limestone chippings, sometime Granite, all mixed into a clear cement resin and then made up into tiles of all sizes. We estimated these tiles we laid more than fifty years prior and were not looking their best after being stained with rust stains from heavy equipment, cooking oil and grease, ingrained dirt and grime. Although a tough job to tackle it didn’t put us off and as you will see we still managed to get them clean again.

The method we used to restore the surface was to cut them back using a set of burnishing pads which take off a few millimetres off the tile surface and regrinds to make them look as good as new, this is something you can’t do with Vinyl Tiles or Ceramic and Porcelain. The pads are encrusted with diamonds and are used in conjunction with a little water; you start with a coarse pad and work through the set of pads which become finer in grade as you progress until your polishing the surface. Once this process is complete the floor was given a good wash down to remove any soil and allow us to spot any areas that needed further attention.

When the Terrazzo tile was dry it was sealed sealing with two coats of Tile Doctor Colour Grow which is an impregnating matt sealer that brings out the colours in natural stone, the client had also specified they didn’t want a shiny finish as they had a concern about slippery surface that could lead to slips and falls. Once the sealer was dry it was buffed using a white buffing pad.

The results are quite satisfying given the age of the floor and the stains we had to deal with not only that but the owner had engaged a number of other cleaning companies who had tried a test clean and he had even tried cleaning it himself but the results were poor.